When Leigh visited recently, he commented on the strawberries growing in the lawn in the front yard and knelt down to eat some, fresh from the plants. I’ve been seeing grass growing as weeds in between the strawberries and criticising my lax maintenance in the front garden. The grass has had the advantage of making the berries a bit less visible to the birds as well.

Another perspective shift happened a long time ago. I don’t ‘weed’ the vegie garden anymore. I collect fresh surplus green stuff for the rabbits. 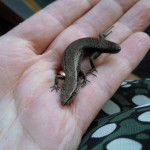 Our previous cat Rosie was not much of a hunter. Milly and Ruby however are enthusiastic and skilled young hunters. I have decided it may be better to let them play with the (still alive) skinks they bring inside. This, I reason, means fewer skinks die overall. If I save the skinks by taking them back outside, the cats just go hunting again. 5 was the record number of skinks we counted brought inside in one summer day. A few weeks ag we came home to a living space covered in feathers and some blood and bone booster for the compost, previously known as a dove. I’m a bit embarrassed by the decimation of wildlife – it’s not even during night hours when some people keep their animals inside. The cats have received a few lectures about it being OK to catch blackbirds, sparrows and starlings. They seem to prefer the pretty ones.