* photos to come once I figure out the visual editor stuff and make it work again.

This book is, unsurprisingly for the French speakers out there, a whole bunch of jam recipes. Which is good, but we don’t eat that much jam. So I have used the book more as flavour combining inspiration. I did make the Quince, Cardamon and Orange Marmalade (p152). Which is to die for. Luckily I have more bottles of quince juice tucked away  so I can make more later in the year.

I used the Pear with Caramel and Spices (p187) as an inspiration for some bottled pears which turned out delightfully.  My tweaks were: replace making caramel/ toffee with a scoop of dark brown sugar when making a spiced syrup with cardamom, star anise and cinnamon. This works equally well with stewed apples and makes for a quick dessert warmed through. This has got me thinking about more of our preserved fruit next year being ready made combos – eg crumble fillings with apples and berries. 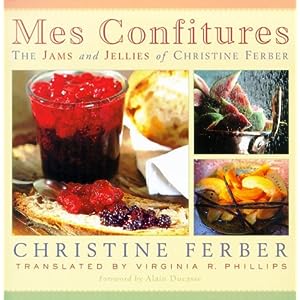 The following day, the mixture is strained and juices are boiled until they reach setting point, fruit is added back in and it is boiled another 5 minutes before bottling.

Pectin is added in the form of Green Apple Jelly. Lemon juice aids setting. Where fruit juices are used (as in the marmalade reference above), strained juice is left to settle overnight so the clearer juice on top can be used. These technique based attention to details result in a stunning looking preserve.

Franklin Penny (as we’ve decided to call her) organised a fantastic workshop that came at just the right time for us. Over the past 12-13 years we’ve planted and pruned fruit trees with varying degrees of success in our garden. Some trees have been persistent problems, others just settled comfortably into their shape and produce fruit year after year. Chris Steenholdt was ‘Expert in Residence’ and Penny’s young fruit trees were the working examples.
Wisdom:

We both came away feeling more confident we can rejuvenate some existing trees and take care of planned new plantings this winter.

Reflections on past pruning and training in our garden:

Note to self – when you come home and wander around your own fruit trees, don’t try too hard to see how far over the nashi pear can be coaxed. Bits will rip off in your hands.

Fruit Harvesting Doohickey. Not to Scale

Crazy idea #143: Make a fruit harvesting stick – an extendable painters pole with a doohickey at the end for coaxing fruit off. So that you don’t have to keep taking the fruit out of a container at the end of the stick, make a tube of semi-frictiony fabric to slow down the fruit’s journey into a bucket. Last year I made a similar device out of the kitchen broom, a small round plastic container and masking tape. It was very useful for getting at the high white peach by standing on the back stairs and leaning over the railing. Original source of idea – the mango harvesting stick Dad made in Cairns. Saved many a mango from the fruit bats. The idea was refreshed and the tube side of it came from staring at the pears 8 foot up the old pear trees in the public paddock across the road.

Sleeper moved from clothesline mound down to the… A laundry tub full of apples

Cherry tomatoes nibbled in the garden

New term learnt on the weekend – “Urbanite”: not quite a type of rock, rather the name given to lumps of concrete.

This week I have been grateful for the stash of jars under the house in the garage.

The preserving tally runs at over 370 jars or packets of stuff. Which means using about 1 jar a day through the year. I’ve turned it into a bit of a joke with myself – going ‘garage shopping’.

This week I have used: Part of the Stash: the left hand side

And this week I have bottled 8 jars of pink jam (strawberry & rhubarb). The ginger and lime pickle will be decanted into smaller jars this weekend.

One of the interesting things about reading a lot of foodie/preservation blogs from the northern hemisphere is being out-of-step with their seasons. Many bloggers seem to be excited by rhubarb at the moment, and there has been an explosion of recipes as it is one of the first fruit to emerge at the start of spring.

Well, mine was growing all spring, summer and autumn, and this morning I finished what was probably my second batch of rhubarb cooking in 12 months. It doesn’t really go dormant in my garden. The original plants, (thanks for the correction Dad!) came from Marie who worked in the same building as Dad and had this variety in her family for generations.It is a lovely thick stemmed red-just-tinged-with-green rhubarb. Because it just sits there, quietly growing and not demanding attention I rarely pick it. The chickens dose themselves on the leaves from time to time (self-medicating for worms perhaps?). Recently I picked a batch to aid pruning access to the apricot tree growing above it. There must be a good six to eight corms there now, from an original two. I suppose I should mulch it or sprinkle some compost on it to provide encouragement.

Last night I made Pink Jam – Strawberry and Rhubarb combined with a touch of lemon. But it didn’t set. I think I am being impatient with my jam making, and many North American recipes use less sugar than a 1:1 ratio, but ensure a good gel with added pectin.

This morning, I emptied the jars into a saucepan, added another 1.5 cups of water and a packet of jamsetta, boiled briefly and rebottled. Within an hour it was a firm set which I do prefer. The taste is nice – neither rhubarb nor strawberry dominate, the flavour is very PINK! I think I need to stock up on Jamsetta or consider making a batch of pectin stock from green apples before the apple season is out.

Now, it’s morning tea time and I’ve got a pot of baked rhubarb to enjoy