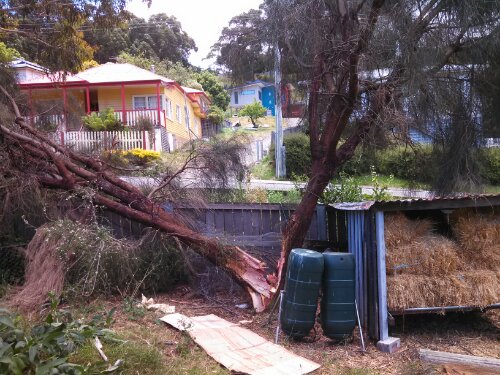 What was once a lovely tall she-oak tree is currently being chopped and chipped up after the strong winds yesterday. We now have space for a few more fruit trees at the bottom of the garden. And only a month after we’d relocated the straw shed to take advantage of the shelter the tree offered from the prevailing rain direction. Ah well, at least we won’t have to buy the batch of mulch we had planned.

2013 was an odd year, very little really happened in the garden for a bunch of reasons. My garden plans for 2014 are nebulous so far, just a few ideas about converting more of the veg garden areas over to perennial plantings. It’s nice to be back writing here.

We are cheating by doing our apricot picking and summer pruning at the same time. trimming a branch and picking the fruit off. The fruit on this tree is a lot firmer (Trevatt or Tilton?), but we know when it is ripe because the wattlebirds start crashing around in the tall branches. This apricot tree used to sit next to the old chook shed, so it has a legacy of rich soil (we moved the chooks not the tree). Each year it tries to double it’s size. So it is a good thing it is easy to climb. We’ve picked over 10 kilos of fruit this weekend, some is bottled already, with more waiting for preserving tomorrow. And I think I’ve eaten about 5 kilos of the fruit in the past two weeks. While the rest of the vegies are looking pathetic from the hot and overly dry weather, the apricot and other fruit trees have tapped deep down and are making delicious juicy fruit. Mother Nature at her best. I’d cast a spell for rain if I could. Deep soaking rain to seep into the subsoil.

This morning I disturbed a wallaby actually in our backyard. Before I realised it was a total fire ban I’d turned on a sprinkler in the front yard and noticed some wallaby poo. Not too unusual given we sometimes leave our front gate open, and the wallabies are becoming more frequent visitors to the nature strips.

Most unusual was the wallaby poo near the water tap in the backyard. Which is when I started looking around. Milly cat and I spooked the poor wallaby under the natives at the side of the house and I decided to open the front gates and hope it headed that way.

Zac snapped a photo near some of the fruit trees before it left us. It was only a small one and its slightly dishevelled coat might have been the source of some tufts of fur lying on a garden path earlier in the week. Milly cat was much more in hunting mode than I’d expect when you consider the scale of a wallaby vs a cat. So I was glad it made it’s way up through the berry patch and out the front.

We really need some rain to replenish not just our suburban garden but also the bush in the reserve up the valley. It must be very slim pickings up there.

PS: I also discovered a couple of draft posts about our meat smoking and curing adventures in November, will add photos and publish soon. Finally got back to the Aquaponics system after a intense time of weeding and planting.   Lawn mowing and animal shed cleaning didn’t get done because of this.  It took longer than what I expected.  I’ve decided siphon are “fussy” and that is reason most aquaponics systems have grow beds that drain to tanks directly underneath.

Other stuff that happened this weekend:

Maybe next weekend we might be water into pond.

Systems are part of what helps us in planning and trying to keep an even keel in the garden. Or at least minimise the damage when we get busy with other things.

Edges to the vegie beds- grass barrier formed by double rows of bricks and mulch is very easy to mow or whipper snipper up to. and planted with oregano/ marjoram in some places as an experiement to act as a green barrier. Processing greenwaste & kitchen waste
Rabbits get selected greenwaste including twiggy prunings and things like couch grass and dandelion roots because they transform them into manure without the danger of spreading weeds further. Chickens get the kitchen scraps and bulk greenwaste especially that with seeds or flowers about to seed. They eat some, kick around the other bits and mix it all with chicken manure and straw. Perfect compost making ingredients. Worm farms get some kitchen scraps – things like bulk apple cores and skins from bottling, or overgrown zucchinis that the chickens will just kick around. Rabbit manure is also a favourite ingredient to the worm farm mix. - Compost area with multiple bins. We are now up to 7 I think. 4 regular ones, and 3 tumblers. The favourite tumbler is the one in this photo below. Seed raising
- heat mat in laundry – don’t use this as much as I used to, since Chris started Hobart Kitchen Gardens and sells wonderfully healthy and interesting seedlings at the FarmGate Market.
- greenhouse for young plants and tomato race contenders. This greenhouse is tucked in under the back stairs and enclosed with laserlite. When we had the stairs built, this space underneath was perfect for a short person! It’s all about maximising the return of investment of time and energy. For example, the compost is just outside the chook shed. The wheelbarrow can fit in the chook shed door, and the chooks kick and scratch the greenwaste and straw downhill. We can go to the greenhouse easily off the deck – so we can pick herbs in our socks if needed. When the aquaponics are up and running the growbed will be in the greenhouse, making this even better.

We have three pear trees of varying ages in the backyard. Something has obviously confused the Winter Cole. It didn’t have a single flower this year. Pears can be rather biennial in their fruit bearing, but this is dramatic. Compare and contrast: Much of the blossom of the nashi is actually hiding under the leaves. The Williams had a rest year for the 2012 harvest, only about 10 kilos of fruit which was good as we were still eating the bottled fruit from a bumper harvest in 2011 up until a month ago. That tree must be about 10-12 years old.

The Winter Cole is in the sunnier spot of the three, and was planted in the same year as the Nashi about 3 years ago. For a while I wondered if it might be the close proximity of the rabbit cage (and their droppings), but the Nashi has had them alongside for much longer. There has been quite a bit of green growth on the Winter Cole to make up for the lack of blossom. Everyone online seems to feel what is called a ‘flood and drain system’ is the best for aquaponics, because it means the plant roots are not underwater all the time.  The key to this is a bell siphon that means when the water gets to a certain height all the water from the grow bed is drained out.  I was talking to Dad about this and he said  “Oh we don’t need to make one of those, we can find one in the backyard. They are in the supply tanks for urinals”. After searching in the back corner of the yard (and realising some stuff hasn’t moved for 25 years .. I need to clean up the office)  we went searching at the Hobart and Glenorchy tip shops and found one at Glenorchy Tip shop for $3. It’s not very tall but it should be great for our system.

We discovered for the siphon to work well the diameter of the outlet pipe is extremely important.  Here’s a bit of a sketch.

It feels a bit odd to be writing a blog post here because I normally let Kirsty do all the Cato Garden blogging.  Last winter I started to think about an aquaponics setup.  The idea of growing our protein and the tech and science got me interested.  But there was something about the complexity of farmed fish in Tasmania which put me off and the idea of more daily work put me off as well.  Watching the Urban Permaculture DVD I was inspired again this time in a different way.  Focusing first in the idea of having water and fish in the garden and the aesthetics of that. Also instead of trying to grow fish to eat we are going to start with Goldfish.

Here is a rough plan of what we are going to do at this stage. The 1st stage is a 150 litre fish pond with Goldfish and a small 50 litre grow bed in the our existing green house under the back stairs.  It’s a simple system where the grow bed should drain directly into the pond.  We don’t have any outdoor powerpoints so the plan is to run it off 12v.  This does make it more complex.

Ideas for later are: We have already sorted out the bell siphon and Zac has dug the hole for the pond.  I’ve cleared Petty St’s workshop of 12v pumps and Dad being a plumber is making this a lot easier and I think he solved about half of the problems.  The downside of the 12v pump is they seem to be only able to lift the water about 90cm but that should be OK for us and they only use 1 AMP when they are running.

The photos of the building process are under the tag aquaponics and I hope to write about the process as well. The 1st process post is about the bell siphon.

We had a ball opening up our garden recently for the West Hobart Environment Network people. On a perfectly sunny Sunday morning, about 15-20 people traipsed down the driveway and through to the backyard where we talked about fruit trees, vegies, chooks, rabbits, compost, worms, ground covers in orchards and more. We had done a bit of prep over previous weekends – taking a load of greenwaste to the tip which had been hanging around for a while, and also did some general tidy up. Both sets of grandparents came and lent a hand too – couldn’t have done it without you!! The garden is still displaying the benefits of the attention.

Prep for an Open Garden

I would try and set up a demo of the soil blocking tools and materials.

One day we’ll get the front garden in order and can include that in the tour.

We’ve volunteered ourselves to be part of the West Hobart Environment Network’s Open  Garden Day next weekend.
So I’m dressed in my gardening clothes and about to head outside and tidy up the place a bit.
Want to come and have a look? Here’s the promo email.

Dear WHEN members and supporters

The daffodils are out and the daphne is filling the West Hobart streets with perfume.

You are invited to shake off the winter blues and come and visit some lovely gardens in West Hobart. See how your neighbours are dealing with the challenges of home fruit and vegie growing, get some tips and enjoy a chat with fellow gardeners. Maybe go home with some cuttings or plants! Gardens with sections for native plants will also be included.

This open day is organised by WHEN’s Gardening and Food group (GAF), and is inspired by the highly successful “Gardening with the Bush” Garden Tour which was organised by Sustainable Living Tasmania some years ago. To respect the generosity of our generous gardener hosts, people planning to visit will need to register with GAF. You will then be sent a copy of the day’s schedule, with addresses and times.

To register for the Winter Gardens Tour, email whenvnet@gmail.com or phone Margaret on 6231 4751 .